We conducted the first in a series of Town Halls on Reimagining the Role of Police in Our Communities; we pivot to work on the election, with important updates on the early voting centers and how you can vote; and equally important, how you can help to get out the vote, including phone calls and field work; and we petition the Federal Reserve to treat We the People like they do corporations.

Town Hall on Police in Our Community

On Saturday, October 10th we conducted our first of multiple discussions about re-imagining the role of the police in our neighborhoods. It was well-attended and attempted to find answers to two difficult questions: What does “Defund the Police” mean to you? and Can the Police be Helpful in Our Communities? We got great feedback, which will provide us with the materials we need for our next town hall. We’ll let you know when that will be in the coming weeks.

You Can Vote Early – In Person

With just 25 days left until Election Day, the Early Voting Centers (EVC) throughout the city are a great success – Yes, there are “good things happening in Philadelphia” – like promoting democracy and getting every person to vote in this election. The Early Voting Centers are booming with voters anxious to cast their vote.

You can go NOW to a satellite election office and vote in person, TODAY!  At these offices, you can:

Seven locations opened on Sept 29, and 2 more are coming on line– The Creative and Performing Arts School will open today, Friday, 10/9. The AB Day School will be opening Tuesday, 10/13.

To avoid long lines on election day or any issues with mailing, you should visit one of these centers. Here are the nine satellite election offices, all with the same operating hours  (Monday-Thursday, 11:30AM to 6:3PM; Friday-Sunday, 9:30AM to 4:30PM): 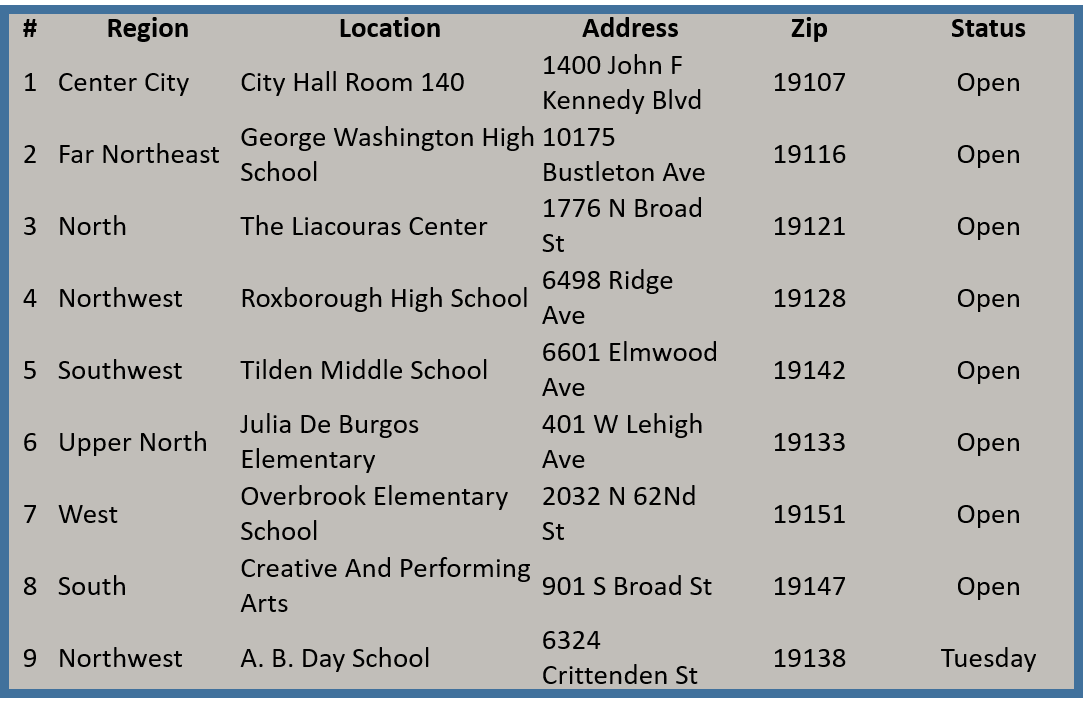 Be an Early Voting Center Volunteer

With the Election only a few weeks away, you can help by volunteering at one of our City’s Early Voting Centers– working tables, driving voters and doing literature drops in the neighborhoods surrounding the EVCs to let folks know they can vote early to avoid long lines on Election Day. These sites will be open seven hours per day, seven days a week, and we’ll need to fill shifts to have coverage for all of this time.

We have phone banks every Wednesday at 1PM, Thursday at 10AM and 6PM and Saturday at 1PM. We are tasked with reaching out to 81,000 voters in NW Philly to remind them how important their vote is to saving our democracy. If you haven’t yet signed up for a phone bank, you should really try the new ThruTalk auto-dialer tool.  It makes the calls for you; all you have to do is log onto your computer and wait for the beep.

Tell the Federal Reserve: Serve We the People

The Federal Reserve must do better by the American people. This institution has a long history of making very low-interest loans with generous terms to banks and corporations in the private sector.

Sign the petition demanding that the Federal Reserve provide all states, territories, local governments, and government agencies access to long-term, zero-cost loans. This would allow our public officials to refinance all of our existing debt into new interest-free loans, and free up more than $160 billion a year to reinvest in community services. It would also enable them to take out new loans to pay for long-term capital projects to make our infrastructure more resilient without having to pay any fees or interest, dramatically reducing the cost of future borrowing.

This Week in History

Oct 10, 1973 – Agnew Resigns. Spiro Agnew became the first Vice President to resign from office after he pled no contest to tax evasion in exchange for dropping the charges.

Oct 14, 1962 – Cuban Missile Crisis. U-2 spy plane provided photos of Russian missile launchers on Cuban territory, sparking a 13-day crisis that threatened nuclear conflict between the US and Soviet Union.

Thanks for your activism!