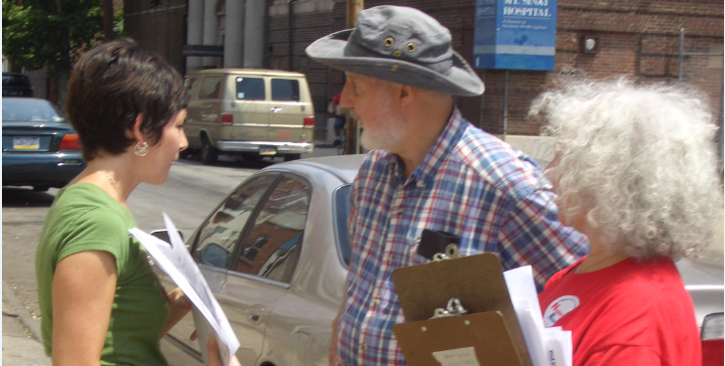 Every four years the nation focuses on the race for the White House, but NN understands that political power starts with the committee person, ward leader, city councilperson, district attorney, mayor, judge, state legislators, governor and judges at all state levels – and that these are important races that we can influence.  So we endorse and assist down-ballot progressive candidates in primaries and off-year races as well as those in the major national contests for Congress, Senate and White House.

After a detailed endorsement process NN members vote on a slate of candidates, and depending on our resources,we may open offices to stage door-to-door canvassing efforts, telephone banking and polling place literature distribution.  In national elections we may volunteer with a campaign and become campaign leaders in our own wards. We see our electoral work as follow-through on our policy positions and we urge you to join us in these lively campaigns.

Members of the Steering Committee lead this effort overall with teams that focus on researching and interviewing candidates and supporting candidates we endorse.

Click here for information on the NN Endorsement Process

It’s just over a month until the 2017 election. The vast majority of Philadelphians will not vote in it. And that’s a big problem for all of us for at least three reasons. The first is the damage it can do to Larry Krasner and everything he stands for. Yes, Larry Krasner will (almost definitely)...

Just six months after the devastating loss to Trump, Philly has roared back and sent a message that will be rocking all the way to Washington. We’re not sitting back and letting the Republican Party rob us of everything that got started in this town 220 years ago. And more than that, we’re going to...

Want to help out with the electoral process here in Philadelphia? Click here to sign up. Be sure to select “electoral politics” as one of your areas of interest.

Based on our surveys of candidates, Neighborhood Networks members endorse key candidates. Click here to see our recent endorsements.

Click the button to donate. We appreciate your support; it enables us to do what we do.